Two days ago, Sport reported that Chelsea are ‘keeping an eye’ on Barcelona’s Sergiño Dest.

Thomas Tuchel’s side have recalled Kenedy from his loan spell at Flamengo, and he now joins Marcos Alonso as left-back options currently at Stamford Bridge, after Ben Chilwell was ruled out for the rest of the season.

Monday’s edition of Mundo Deportivo claims Dest has had proposals from four Champions League clubs, including the Blues and Bayern Munich.

The fullback ‘did not contemplate’ leaving the La Liga side and was determined to fight for a place at the Camp Nou. However, the ‘situation is beginning to change’ with an ‘almost radical change of script’.

Dest is confident about fighting for a place at Barca, but his entourage ‘no longer close’ the possibility of leaving Xavi Hernández’s side in the winter market. The offers handled by Chelsea, Bayern and two other unnamed clubs, are mentioned again. 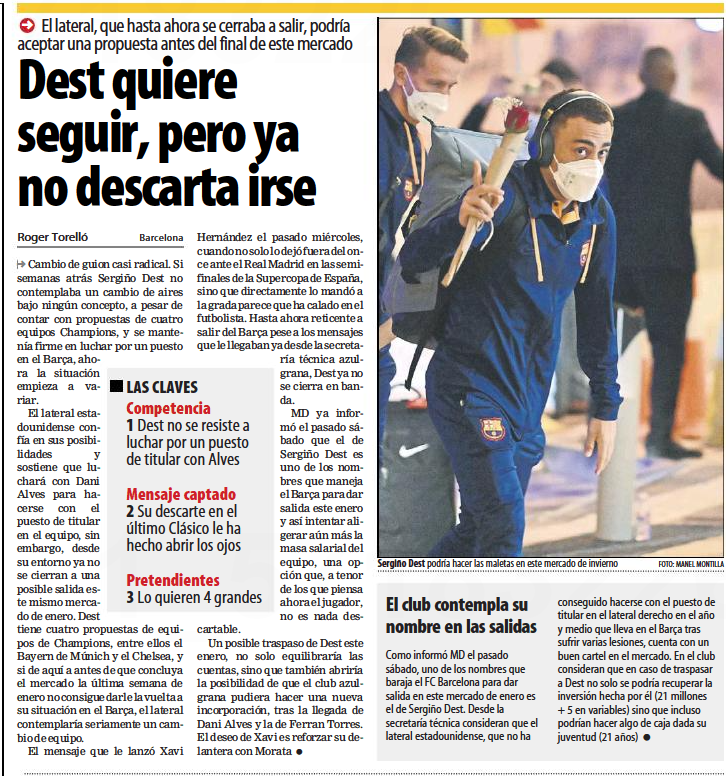 It’s claimed the American would ‘seriously contemplate’ moving in January, if his situation doesn’t improve between now and the end of the mid-season window. He took this stance after Xavi left him out of the squad for Barca’s Supercopa de España defeat to Real Madrid.

With Chelsea, Bayern and two other clubs already making an offer for Dest, Mundo states his exit this month would not only help Barcelona balance their accounts, but also help them bring in a new player to the club in the ongoing window.

Barcelona invested €21m [plus €5m in variables] in signing the USMNT defender. Through Dest’s potential sale, the Catalan club could not only recover the money spent on him, but can also ‘make some cash’.

Mundo have not taken into account Chelsea recalling Kenedy and with this, it remains to be seen whether the Champions League winners will still go after Dest in January.