Back in the summer of 2019, we saw Everton getting heavily linked to River Plate midfielder Santiago Sosa.

The Toffees were said to be strong in the race for the youngster, but didn’t have the guarantee that he’d get a work permit to feature in the Premier League.

Once Everton found out the visa wouldn’t be granted, it was even claimed the club would hire a specialist to make things possible.

The move never happened, and there are interesting claims about it coming from Argentine newspaper Olé today. 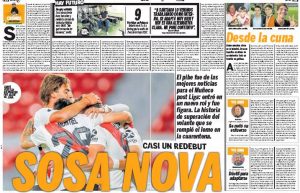 They bring a big story saying how good Sosa has been for River Plate, and finish it by recalling the failed Everton move.

It’s claimed he was ‘close’ to joining the Toffees on a €15m transfer, and that was blocked by the Premier League.

The most interesting claim is that according to Olé, Sosa managed to get his European passport a ‘few days later’, but that was too late.

With the 21-year-old now proving his potential at River Plate, perhaps Everton still have an eye on him, but do they know he’s now eligible for a work permit?