Manchester United’s need to sign a new centre-back has been widely discussed and Real Madrid’s Raphaël Varane has been put forward as their priority target.

The 28-year-old has entered his final 12 months of his contract and ‘continues with his future in the air’, reports Marca on Friday.

After representing France at Euro 2020, where they were knocked out of the tournament by Switzerland, the defender is currently on vacation.

The ‘Varane case’ is still pending at the Spanish capital club because there’s the possibility for him to renew his contract, join another club in the summer or continue at Real Madrid for one more season and leave them as a free agent in 2022.

If he decides to leave Carlo Ancelotti’s side, the newspaper states the Red Devils will be the former Lens man’s ‘main destination’.

Marca are of the belief that ‘right now, the most likely option’ is that the Frenchman leaves the La Liga side, so a summer transfer is expected. 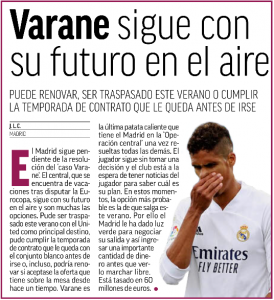 This, coupled with Manchester United’s interest, has seen Los Blancos give the ‘green light’ to the player to negotiate his departure, so that his sale can help the club make cash.

Real Madrid value Varane at €60m, and whether or not United are willing to meet their demand isn’t mentioned in the report.