Despite players being at the Euros and helping their teams progress through the competition, transfer business involving them is still taking place, with Jadon Sancho the prime example of this.

Another at the heart of a saga is Manuel Locatelli, who is wanted by a handful of clubs, including Arsenal.

Juventus are the Gunners’ main competition for the signing, and while they have the financial advantage, there is a belief the midfielder would prefer to move to Turin if he was given the choice.

This is what Gazzetta dello Sport are reporting on Monday, dedicating nearly a whole page to the matter.

For them, this is the week during which we’ll find out what Locatelli’s future is made of, with Juventus expected to accelerate the matter.

Arsenal, down their end, have made a ‘formal offer’, with them ‘willing to close the deal with immediate payments, within this season’.

With so many clubs normally wanting to spread the fee over many years, the Gunners’ proposal is clearly enticing for Sassuolo, who would see more money quicker than with what Juventus are likely to offer.

That’s because Gazzetta explain the Turin side ‘prefer to think of lighter solutions from a balance sheet point of view, perhaps with the loan formula’.

Locatelli has reportedly ‘made it clear that he doesn’t see other solutions other than Juventus for his future’, and ‘it’s no coincidence that Arsenal managers, for one reason or another, have not been able to make contact with him these days’. 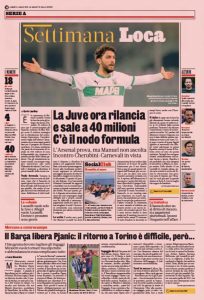 A new meeting between Sassuolo and Juventus is expected ‘in the coming days’, and while a date is still unknown, ‘it’s in everyone’s interest to close the matter quickly’.

Max Allgeri’s side ‘have already shown good will, rising from €30m to the €40m required’ by Sassuolo, but clearly not in a lump sum like Arsenal’s.

And, ‘with all due respect’ to the Gunners, Gazzetta state Locatelli ‘wants to play the big chance in Serie A, with the shirt he dreamt of as a child’.

This all sounds like Edu Gaspar and co. are going to either have to move or prove extremely convincing in the coming week.