Manchester City have set their sights on Nélson Semedo and this was discussed in the Catalan media over the past few weeks.

It was also suggested the Premier League winners are ready to offer João Cancelo to Barcelona as part of the deal.

Sport claims Pep Guardiola’s side want the Camp Nou defender and the two clubs are moving forward on the operation that should see him arrive in England.

The Spanish champions ended the right-back’s renewal talks and with a contract until 2022, Jorge Mendes saw ‘an opportunity to find a way out’ for his client.

Semedo wanted to leave the Catalan club last summer and City were one of the clubs interested in him. No deal materialised then, but his employer are now ready to open the exit door, due to the economic crisis resulted by the Covid-19 pandemic.

Quique Setién’s side have set a €45m asking price for the Portuguese defender.

City plan to include Cancelo as part of the deal, while they would also ‘compensate Barca financially’ because Sport believe the La Liga fullback’s valuation is higher than that of his compatriot.

The La Liga winners initially asked only for cash and had given approval to the transfer. However, it now seems the chance of a City player moving in the opposite direction is ‘very high’. 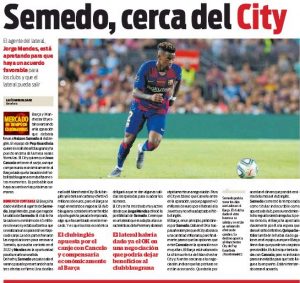 Barcelona are assessing City’s offer and sources close to the negotiation indicate a deal is getting closer. Only the fee needed for a player plus cash deal remains to be agreed.

This whole operation brings ‘Semedo closer to City’, and he’s already given his approval for the transfer.