Home Premier League Player gets ‘breath against destiny’ – Move back to West Ham may...
SHARE

When the year started, Felipe Anderson’s departure from Porto seemed quite likely. The lack of minutes he was having at the Portuguese side were the main reason why he was being pushed back to West Ham United.

However, we’re now heading towards the end of the transfer window, and despite the strong rumours back then, we no longer see reports about it.

So as the Brazilian was a starter in Porto’s cup clash against Sporting last night, part of the Portuguese media see it as a sign that he may stay with the Dragons.

Newspaper O Jogo writes that Felipe Anderson has gained ‘some breath against the destiny’. They say his departure back to West Ham ‘was even being speculated’, and makes it sound like the move was a less likely scenario now. 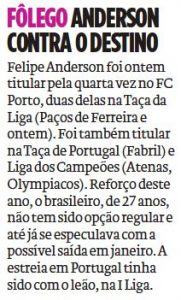 Felipe Anderson now has six appearances for Porto, as his last game for the club had been in December.

He’s been linked to the likes of Everton and Fiorentina this month, but now, a stay at the Portuguese side is starting to look as a stronger possibility.