Barcelona continue to have a Philippe Coutinho shaped problem.

Having signed the Brazilian from Liverpool, the Catalan club clearly weren’t sure of what they should actually do with him, which led to him not reaching his potential there and being loaned out to Bayern Munich.

That’s been an up and down time, and Sport don’t believe the Bundesliga club will be signing the player permanently once his loan move comes to an end.

In the same article it’s claimed Coutinho was last summer open to pretty much any idea which Barcelona put to him. That included him giving the ‘OK’ to signing for Tottenham Hotspur.

Several players have been in similar situations with Spurs, with Manchester United’s Bruno Fernandes a good recent example, and, just like with them, it’s claimed the ‘negotiation ended up breaking’. 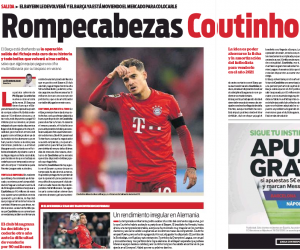 That perhaps led Tottenham back to Giovani Lo Celso.

Sport suggest there’ll still be Premier League interest in Coutinho, and explain Barcelona will be flexible on the structure of a deal again. It’s stated ‘everything indicates’ Coutinho will again go out on loan next season.