On Tuesday it was reported in Spain that Ginés Carvajal, Gerard Deulofeu’s agent, is angry at the way Barcelona are going about things.

The Spanish club have a €12m buyback clause with Everton, and it must be used before the end of June.

Deulofeu himself is away with Spain’s U21 squad and has been stalling on telling Barcelona he wants to return, unsure what his role would be at the Camp Nou next season.

Barcelona can’t use their clause with Everton if Deulofeu rejects the return, so what the player thinks is very important. 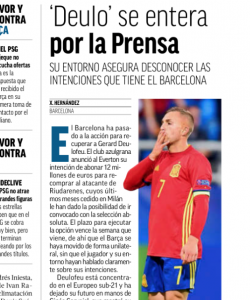 Frustrated with waiting, Barcelona went ahead and told Everton they’d be using the clause, which puts the ball in Deulofeu’s court and means he’d have to reject it.

Carvajal isn’t pleased, and Marca point out that Deulofeu himself only found out via the media.

There’s 9 days left to sort this all out, and Deulofeu will be with Spain’s U21’s, and he’ll hope that’s until the final on Friday 30th June, just as the clause runs out.