AC Milan’s Alessio Romagnoli is on Tottenham Hotspur’s radar, according to Mundo Deportivo.

The defender has a year left on his contract and has ‘rejected’ the renewal offer made by the Serie A side. Therefore, the Rossoneri are looking to offload him this summer, in order to avoid him leaving as a free agent in 2022.

Barcelona have an option to sign the Italian, who can operate as a centre-back and on the left side of the back four.

Ronald Koeman’s side dream of signing the likes of Pau Torres, Jules Koundé or Matthijs de Ligt, but economic limitations has forced them to look at alternatives, and this is where the Milan player fits in.

The defender is also ‘followed’ by Tottenham, meaning he’s under consideration at Spurs. 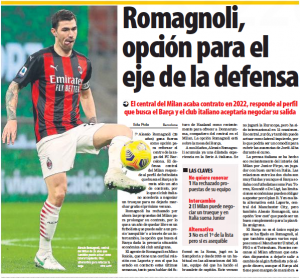 exchange for a player and some money. However, Barca have ‘little room’ to move there.

Joe Roden and Eric Dier are the other two options available in the heart of the back four, and Romagnoli’s arrival could bolster Spurs’ centre-back options next season.