What came across as an almost imminent deal on Friday has calmed down quite considerably over the weekend, with Patrick Cutrone to Wolverhampton barely mentioned in the Italian media.

For example, Corriere dello Sport, normally all over the slightest shred of a rumour, don’t even mention the possibility of the youngster heading to Molineux this summer.

Instead, they discuss how André Silva’s move to Monaco, which seems far more advanced, will leave both Cutrone and Krzysztof Piatek as the two goal scorers for Marco Giampaolo to work with.

Gazzetta dello Sport, however, still talk about a potential move to Wolves for the 21-year-old, yet compared to their Friday claim that Nuno Espirito Santo’s were prepared to put €25m on the table for his services, Monday’s are far tamer. 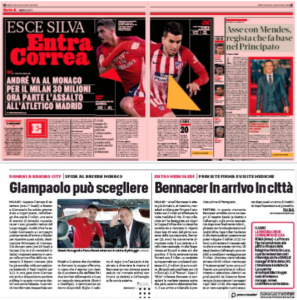 All they do is suggest the transfer is ‘possible’, and the young Italian ‘could find a home’ at Wolverhampton Wanderers in the Premier League.

That’s it. Nothing more.

Perhaps the fact Monaco are willing to pay more for André Silva, most likely thanks to Jorge Mendes, could have scuppered the deal for Cutrone, as Milan might not want to sell both.

That or the fact he allegedly isn’t ‘attracted’ to a move to Wolverhampton as the Europa League isn’t enough for him, and that’s despite the fact Milan won’t be taking part in any European competition next season.