Crystal Palace allowed Alexander Sørloth to join Trabzonspor on a two-year loan deal after the striker struggled to impress in the Premier League.

The 23-year-old has impressed since moving to Turkey, scoring six goals and managing two assists in all competitions, which includes two goals in the Europa League qualifiers.

His performances have seen him return to the Norway squad for the current international break and the Eagles owned player took an opportunity to talk to the journalists from his homeland.

Dagbladet states Sørloth’s time at Selhurst Park was ‘brutal’, which is why he was labelled a ‘failure and flop’ at Palace. The player himself explained the importance of playing regular football.

“It’s very convenient to get started and switch off. That’s what I want: Play football and score goals,” Sørloth said.

Having impressed for Trabzonspor in the first few months of this season, the frontman explains how he is enjoying life in Turkey, even though things can get out of control at times.

“I went to buy myself a TV at a mall. I stopped and took three selfies. One of them sent the photo to a WhatsApp group. Suddenly 50 people came and everyone wanted a bit of me. I ended up staying there for an hour and a half. It was violent stuff,” says Sørloth and ‘chuckles’. 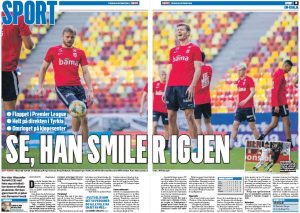 Sørloth scored only once across all competitions at Palace and he was not the first choice player for Roy Hodgson. However, things are different for him at Trabzonspor.

“I’m very pleased. It has been good to get started with goals and I feel that I am an important part of the team,” Sørloth told VG.