Home Championship Player feels Huddersfield’s decision to not use contract option was a ‘mistake’...
SHARE

Laurent Depoitre spent two seasons at Huddersfield Town and managed to score only six goals in the process.

The Terriers were relegated from the Premier League and the striker was one of the players released by the club after the end of last season.

Sport/Foot magazine interviewed the 30-year-old on Wednesday and he was highly critical about the English side, suggesting they were not ready to the top flight.

He failed to score a goal in any competition last term, but explained that was mostly down to Huddersfield’s tactics.

Another Belgian newspaper Het Nieuwsblad also spoke to Depoitre and the frontman revealed he was surprised after the Championship side decided against keeping him at the club for one more season or cashing in on his sale in the summer.

“I was out for three, four weeks with a foot injury and during that period the club had to decide whether they would exercise the option in my contract,” Depoitre explained.

“I said I would rather leave, but assumed that they would still [exercise it because they would] have the option of selling me. They did not do that, which meant that I was up for a free.” 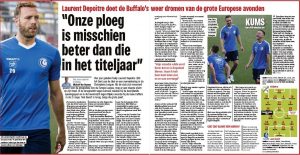 “From their point of view, I think that was a mistake, but it worked out well for me.”

Depoitre returned to Belgium after Gent signed him on free transfer and he has already impressed for them by scoring four goals in five appearances.