Kiko Casilla arrived at Elland Road in January 2019, and months later he had an opportunity to help Leeds United make it to the Premier League.

However, the Whites failed to overcome Derby County in the play-offs, and had to wait for another season before returning to the top flight.

Marcelo Bielsa’s side sealed a berth in the Premier League by winning the Championship in the recently concluded campaign.

Catalan newspaper Mundo Deportivo has interviewed the former Real Madrid goalkeeper, and asked if he’s enjoyed the journey with Leeds so far.

Responding to that, he said: “You suffer more than you enjoy, especially after the frustrated experience we had last season, where we stayed at the gates of the Premier League.

“This season we faced it with added pressure, with the feeling that the club would go through a compromised situation if the promotion was not achieved.”

Leeds’ fortunes changed after they appointed Bielsa in 2018. Having finished third in his debut season, the Argentine helped the club return to the Premier League for the first time in 16 years.

The 33-year-old Spaniard stressed his side wouldn’t have been this successful without Bielsa.

“Definitely. Bielsa is the cornerstone of all this success. The captain of the ship. Without him none of this would have been possible,” Casilla explained.

The former Athletic Bilbao manager has been given a tag of ‘El Loco’ for his coaching methods, but Casilla has a different point of view.

“Not crazy, but a perfectionist. He is a peculiar type who takes care of every detail, every aspect of the game,” the keeper added. 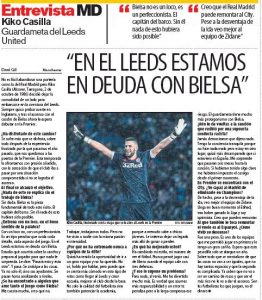 “At Leeds we are indebted to Bielsa. [He] studies what will happen on the pitch and prepares the players so that nothing surprises them.

“He says: ‘This will happen and this will happen’, and it happens. He anticipates things. Not just him, but his staff as well. They spend hours analysing rivals. Work, we all work. But I have not seen anyone with the same passion and intensity.”