Former Wolverhampton Wanderers forward Michal Zyro has detailed the ‘spiral of unfortunate events’ that ultimately led to his departure from the club.

Zyro joined Wolves from Legia Warsaw in 2016 but would only make ten appearances for the first team and eight for the under 23s during his time with the club.

There had been high hopes for him, but fate decided another path for him during a loan spell at Charlton Athletic in League One.

He joined them on loan in the summer of 2018, but it would be a short-lived relationship after a foul by MK Dons’ Antony Kay in 2016 left Zyro with a serious knee injury that required a year to get back from.

He returned to Wolves in May 2018 and was sent out on loan to Pogon Szczecin for a year before being allowed to join Korona Kielce on a free the following season.

Since then, there have been a series of failed moves around Poland, with Zyro yet to manage anywhere near the kind of form that he showed at Legia Warsaw.

It’s been a downward spiral for several years, and he has detailed the start of it in an interview with Przeglad Sportowy.

“It (the injury) was an unexpected moment after which I fell into a spiral of unfortunate events and elections,” he said.

“Today, as a more experienced player and man, I would have acted differently. After the injury and rehabilitation, I went with the Wolverhampton team and coach Nuno Espirito Santo to a camp in Austria.

“After two weeks of training, I heard that I could look for a club. Ten days remained until the end of the window. I was in a slight panic – I could stay in England and fight in the reserves, and I was injured, and playing was the most important thing for me. 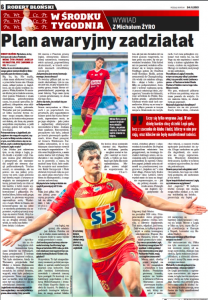 “I could go on loan to Charlton again, but I did not want to go to the third level of the tournament because it was tough there, not to say brutal. This football did not suit me; I preferred to rebuild in a different place.

“But then I had no one who would be able to prompt me, advise me and choose the best option.

“So I returned to Poland. I was looking to play – anywhere. If I had the agents with me now, I would probably be somewhere else. I lacked patience, a cool head and the right advisers.”