Like him or loathe him, there’s no denying that Romelu Lukaku knows how to score goals for club and country.

The striker divides opinion, but he’s been a regular goalscorer wherever’s he has gone, with West Brom, Everton and now Inter Milan all able to attest to that.

Manchester United, albeit reluctantly, cannot deny he had a decent goalscoring record for them despite a turbulent time at the club.

His star shines brightest on the international stage with two goals in the 9-0 win over San Marino this week making Lukaku the first Belgian ever to score 50 goals for the country.

His achievement is being widely covered in the country, with Het Laatste Nieuws interviewing 50 people about the Belgian striker.

Two of those lucky enough to be selected were his former Everton teammates Yannick Bolasie and Kevin Mirallas, who had nothing but praise for Lukaku and his achievements.

“What he’s achieved- for his clubs and his country – will not be repeated quickly,” Bolasie told the newspaper.

“Romelu is a machine that will never stop, but above all, he is a fantastic person. At Everton, he was always there for me, and that is no different now.

“He had a big influence on my choice for Anderlecht last season, and also gave his opinion about Sporting Lisbon.” 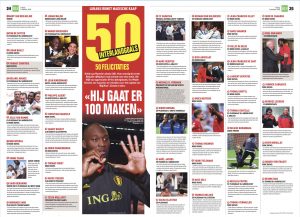 “It is a shame for Romelu that I am no longer with the national team,” added Mirallas, jokingly.

“No Belgian knows him better than me. We formed a deadly duo, also with Everton. But oh well, Romelu will continue to score without me. You should not doubt that.”