Liverpool midfielder Mark Grujic is set to return to the club this summer following his loan spell with Porto.

That’s what Record report today, stating that the Portuguese side have already started plans to secure a replacement for next season.

Grujic has been on loan with the Liga NOS side this season after it was made clear he was not a part of Jürgen Klopp’s plans this season.

It’s the fifth straight loan deal the Serbian midfielder has been on since joining Liverpool from Red Star Belgrade in 2016.

The season has proven to be something of a frustrating one for him, though, with him managing just 15 appearances in the league and 307 minutes of action. 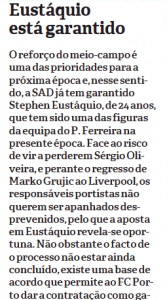 Thus Porto are seemingly uninterested in extending the deal, with Record explaining that he will return to Liverpool in the summer.

Indeed, Porto are already planning ahead, with it explained that a midfielder reinforcement is ‘one of the priorities’ for the club, and on that front, they’ve ‘already secured’ Stephen Eustáquio from Pacos Ferreira.

That process has not yet been completed, but there is a ‘basis of agreement’ that means Porto can take the signing ‘for granted’ and plan ahead for a future without Grujic.