On August 22nd, we carried a report from L’Equipe, who claimed Leeds United and Aston Villa were in a tussle to sign Lille’s Anwar El-Ghazi.

The winger was signed by the Ligue 1 club from Ajax in January 2017 and they are ready to allow him leave because Les Dogues have to meet the requirements set by the National Directorate of Management Control (DNCG).

Wednesday’s edition of the French newspaper claims the 23-year-old is not included in Christophe Galtier’s plans at Stade Pierre-Mauroy as he has eight other attackers for four positions.

The report claims the Dutch international’s exit is ‘imminent’ and that he is set to join Steve Bruce’s side. The discussions between the Championship side and Les Dogues started on Tuesday and the deal ‘may be closed’ today. 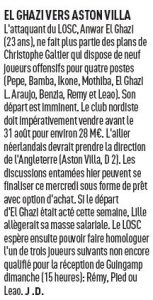 According to L’Equipe, El-Ghazi will join Aston Villa on a loan deal with an option to buy and his exit will help Lille reduce their wage bill.