Home Europe Player on the ‘exit ramp’, and Arsenal have taken the ‘first step’...
SHARE

There’s been a common theme through much of the Lucas Vazquez transfer reporting, and that’s the high regard he’s held in at Real Madrid.

Saturday’s edition of Marca goes over a potential move to Arsenal, and explains the player is on the ‘exit ramp’ at his current club, however, they make sure to say that Vazquez has been popular with every manager he’s had at Madrid, especially Zinedine Zidane.

Unlike the AS claims of Friday, Marca don’t say Arsenal have made an offer yet, although it’s made clear the Gunners have taken the ‘first step’ towards a potential summer transfer.

Again unlike AS, Marca state Vazquez can’t for less than €30m, wheres the other Spanish sport newspaper was pushing the €40m figure. 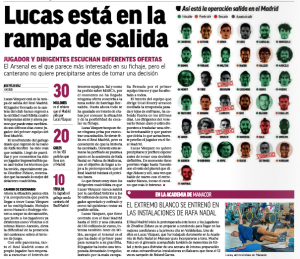 The Premier League club won’t have it all their own way, though.

Inter Milan are also said to be keen, and it would be no surprise if others join the chase soon.