The 24-year-old attacker, known for being extremely fast, mainly plays on the right wing for Utrecht, but can be used elsewhere in attack.

Last season was a productive one for the player as he scored 10 goals and provided eight assists in a reduced Eredivisie season. In the campaign before he found the back of the net eight times and added nine assists in 33 league matches.

Leeds United were said to be ‘approaching an agreement’ for the player, and then it went quiet over the rest of the weekend as the Premier League club have several signing options on the go right now.

Monday’s edition of De Telegraaf returns to the story, with Kerk playing on Sunday against RKC Waalwijk. He scored a goal in a 3-1 victory for Utrecht, as a ‘game of millions’ played in the background.

Despite his transfer being ‘ever closer’, Kerk was determined to play and is quoted as saying: “I think it is an exaggeration not to play now. You like football. Then you just want to play. Why should I suddenly be injured?”

As well as Leeds, Cagliari and Hellas Verona remain in the picture, and it feels like any transfer will be good natured. Despite Utrecht making it clear they want to keep the attacker, there’s also recognition of the level he’s at and that now may be the right time for a move. 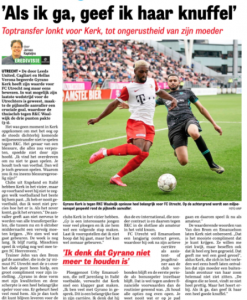 Such a stance has pleased Kerk: “That’s the best compliment you can get. They don’t want to lose me, but they also realise that I have grown a lot. That gives me a good feeling.”

One person who isn’t thrilled with the transfer talk is Kerk’s mother, who is apprehensive about him leaving the Netherlands, and the player said: “She doesn’t like the things she reads very much. But it is part of it. When I go, I’ll give her a really good hug.”