If Jurgen Klopp isn’t enemy numero uno for the Catalan press in the Coutinho saga, then he’s not too far away, and the Everton team selection won’t go away.

The Liverpool manager not only refused to sell his best player last summer, but was also really determined about it, and repeatedly spoke publicly about not letting Coutinho go anywhere.

Without spitting it out, the Catalan reaction seems to have been: How dare he.

Since then Klopp’s failure to get Liverpool into a title battle has been described as something of a failure after he supposedly promised the club’s board that Coutinho would help such an aim.

Every little negative Klopp and Coutinho tangent has been taken, and the Catalan media won’t let go of Liverpool’s team selection against Everton. Already this week there’s been talk of how Klopp not picking Coutinho left the Brazilian disgusted and feeling like his moral case to leave Liverpool had been strengthened.

Rather than Klopp simply resting Coutinho against Everton, or trying to prevent further injury against Sam Allardyce’s men, it was all taken rather more seriously. 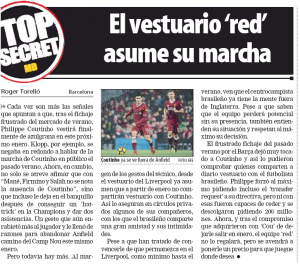 Friday’s edition of Mundo Deportivo says Coutinho was ‘further enraged’ by Klopp’s Everton decision and is now ‘filled with reasons’ to walk out on Liverpool.

But, say the Catalan newspaper, even panto-villain Klopp is starting to realise Coutinho is leaving, and there’s nothing he can do about it… with the hint being the Everton team choice may have been influenced by that.

The Catalan media may be hugely biased, not too hung up on accuracy, and prone to drama… but it’s got to be admitted that they’re hugely entertaining.

Just choose to laugh with or at them.