Home Europe Player has ‘ended his curse’ – Which can only be good news...
SHARE

Sandro Ramirez has finally scored a goal. After 710 days without finding the back of the net, the forward managed to get himself a goal on Sunday against Mallorca.

Sandro signed for Everton in July 2017 and struggled to impose himself for the Toffees. He scored a single goal for the Merseyside club, in a 5-1 Europa League defeat to Atalanta.

That was in November 2017 and in the following winter market he signed for Sevilla on loan until the end of the season. The following season was spent at Real Sociedad, yet Sandro failed to score in either of the loan periods.

Real Valladolid was the destination for this campaign, and he’s again been struggling with form, selection and fitness. Returning from a month out, Sandro entered the pitch against Mallorca after 72 minutes and with his team winning 2-0.

Then, in the 94th minute, the player ‘ended his curse’.

Marca say it will ‘surely mark a turning point’ in the 24 year old’s career.

In his last match, against Atletico Madrid at the beginning of October, Sandro had missed a penalty… which made everything worse. 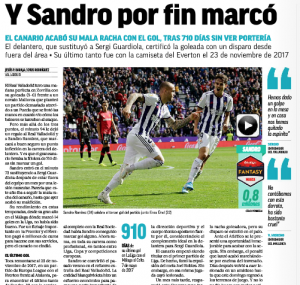 Valladolid have bet strongly on the Everton owned player, paying a big chunk of his wages, and that he’s now expected to kick-on and put the nightmare behind him can only be good news for those in charge at Goodison Park.

A few more goals and the possibility of receiving a transfer fee will only grow.