Barcelona are doing their best to nudge Martin Braithwaite out of the door, but are facing some resistance.

Signed in an emergency deal earlier this year, the idea was always that the striker would then quickly leave. As far as the Catalan media have it, that scenario was discussed with the player’s agents at the time of the initial transfer, however, Braithwaite is now quite content with Barcelona life and doesn’t want to go.

Leeds United interest was pushed in Catalonia a few days ago, along with West Brom and West Ham. The stance was again that Braithwaite isn’t keen on leaving Barcelona in the January window.

As the Blaugrana continue to try and convince him otherwise, Danish newspaper Ekstra Bladet gives some reasons for hope. That’s largely related to Euro 2020, being held next year after postponement due to Covid-19.

Staying where he is and getting little to no football would hit Braithwaite’s chances of featuring for the Danish national team, whereas it’s assumed he’d get more football at somewhere like Leeds United. 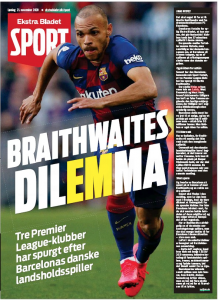 That may be true, but Marcelo Bielsa’s side already have several options in attack and a lot will surely be dependent on what happens between now and January.

Should Bielsa feel he needs an addition then Victor Orta will get to work on convincing, something Leeds have been excellent at in recent years.

As Ekstra Bladet make clear, it’s that Euros dream which could prove the difference on the player’s side.