Turkish newspaper Karar report Galatasaray could be dealt a blow in their pursuit of Ezgjan Alioski, as the player is edging closer to staying at Leeds United.

The Macedonian left-back has been closely linked with a move to Turkish side on a free transfer as he’s approaching the end of his Leeds United contract, but Karar report he could still stay at Elland Road.

It’s claimed the Leeds United board have offered him a new contract and the 29-year-old is now seriously considering accepting this offer.

The current situation at Galatasaray could play a huge part in this decision say Karar, as Gala are currently without a manager. They’ve yet to hold their elections for the new president which will determine who will be charge of the team next season. 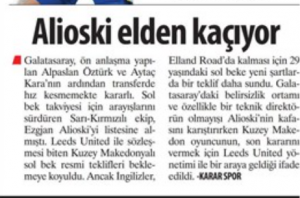 Alioski will reportedly inform both Leeds and Gala in the coming weeks over his future as he has yet to make a decision at this stage.

The former Lugano player, who joined Leeds in 2017, made 36 appearances in his debut season in the Premier League, scoring two goals and providing three assists.