Following Darwin Nunez’s 26 goals scored this season, including the one against Ajax which this week gave Benfica the qualification to the Champions League’s quarter-finals, there’s obviously a big race for his signing in the summer.

Manchester City are a club who have been linked to the player for a long time, and in a story featured on Thursday by newspaper Record, they’re pointed out as one of the main contenders for his transfer.

The front page article says Benfica have now set a price for Darwin’s departure in the summer, and that’s of €80m, but despite the many clubs who want him, the player has his own preferences.

Record claims the striker, who did not like the approach from a couple of less important Premier League clubs in January, actually ‘dreams’ of moving to a top European club such as Atletico Madrid of Manchester City, which is also a reason why he changed agents. 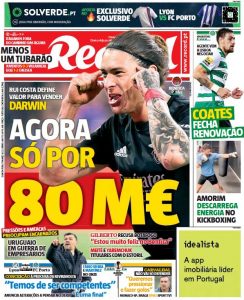 It’s said Pep Guardiola’s side have been following Darwin for a long time, and Benfica shall not wait for the World Cup to see his price raise, meaning that if a good offers arrives in the summer, they’ll be ready to cash in with his sale.

So even if the likes of Newcastle United and West Ham make new efforts to sign Darwin at the end of the season, Manchester City should be aware they have the player’s preference, and could use that card to get to a good deal in the process.