It looks like Mario Mandzukic’s transfer from Juventus to Manchester United could happen sooner than expected.

This possibility is brought by Turin newspaper Tuttosport today, who says the move could be agreed between the clubs in December.

Mandzukic hasn’t been training with Juve’s first team, and according to the report, he ‘dreams of going to Manchester United as soon as possible’.

It’s said the striker would like to start training with the Red Devils for a month before being eligible to play, and that’s why he would like the clubs to hurry up. 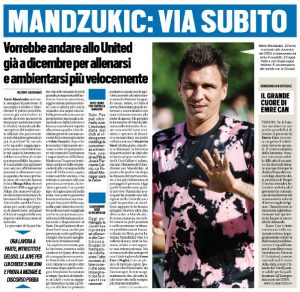 Tuttosport claims Juventus director Fabio Paratii has had new contacts with Manchester United, who haven’t given up after a reported failed attempt in the summer.

It’s said Juve now value the player at €4.5m, and there’s a very good relationship between the clubs.

Tuttosport doesn’t miss the chance to add other rumours to the story, claiming that Emre Can and Paul Pogba are two other players who could be involved in deals between the clubs in the future.