Three days ago, we relayed news from France that West Bromwich Albion and other Premier League clubs were studying the profile of Metz forward Habib Diallo.

On Sunday evening, France Football came out with a report explaining the 25-year-old was expected to join Sheffield United.

Metz sealed a 3-1 win over Lorient on Sunday, but the Senegal international wasn’t part of the squad.

That’s because, according to France Football, the attacker travelled to England to finalise his signing with the Blades.

It was claimed the Ligue 1 side would receive a fee of around €15m plus bonus, and Diallo wuld be able to fulfil his dream of playing in the Premier League.

Monday’s edition of L’Equipe also explains the player left the squad hours before their clash against Lorient yesterday, and it was to do with his potential transfer.

However, Diallo will not be joining Sheffield United or the Baggies, According to the newspaper, he’s closing in on moving to Strasbourg and they hope to finalise his signing soon. 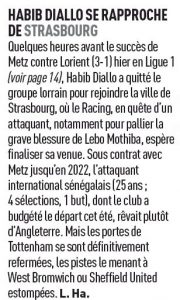 Diallo ‘dreamed of England’, but the door to Tottenham Hotspur, who were linked, was ‘closed for good’ and tracks leading to Sheffield United and West Brom have faded.

Two contradicting reports on Diallo, and it won’t take long to find out which one is right.