During the 2018 winter transfer window, Yannick Carrasco left Atletico Madrid and made a switch to the Far East as he joined Dalian Yifang.

After spending a year with the Chinese Super League side, the winger now wants to leave them and is eyeing a reputed club in Europe, if a report from Belgian newspaper Het Belang van Limburg are to be believed.

It is explained the former AS Monaco man is in ‘discussions’ with Arsenal over a potential move to the Emirates this month.

The Belgium international’s possibility of joining the Gunners doesn’t look high because HBVL claims the north London club are having a problem as they cannot do ‘crazy things’ in January.

In other words, Unai Emery’s side will not be able to invest in securing the services of the Belgium international and would only consider signing Carrasco if it is a loan move. 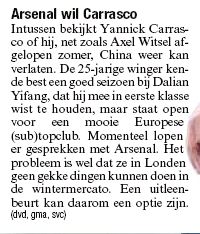 Whether Dalian Yifang would part ways with Carrasco is still not clear and even if they are willing, it should be seen if they will sanction a loan move for their player.