Henry Onyekuru isn’t going under the knife as quickly as Anderlecht first wanted him to. The Everton loan player recently picked up a medial knee ligament injury and his Belgian temporary club announced there’d be surgery on the way, with a lay off time thought to be around 4 months.

Then reports came from Nigeria that Onyekuru wouldn’t need knee surgery and would instead rehabilitate with Everton, and aim to be fit for the World Cup.

Het Belang van Limburg report the player himself as saying: “Everton looked at the scan of my knee and believe that surgery isn’t necessary. The problem can be solved with a knee-relieving treatment and soon I will sign up for Everton.”

That led Anderlecht to, perhaps strangely, release a public statement saying surgery is needed and will happen. But Onyekuru has now gone on holiday to Nigeria and it doesn’t seem like he’s keen to return to his loan club. 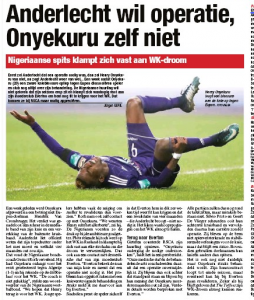 It’s a tricky situation for Everton, with Het Belang van Limburg saying Onyekuru won’t give up his ‘dream’ of the World Cup.

Whilst disagreeing with Anderlehct over the matter would be a relatively minor matter, Everton own the player after all, the Premier League club won’t want to damage Onyekuru’s long term fitness, or be seen by him to kill that Russia dream.