At the end of September, RB Leipzig agreed a deal with Dinamo Zagreb for Joško Gvardiol and allowed the centre-back to continue at the Croatian club on loan for this season.

Prior to the two clubs finding an agreement, Leeds United were keen on signing the 18-year-old.

The Whites even made an offer in excess of €20m to acquire the defender’s services, but he decided against joining them. Agent Andy Bara said Leipzig offered a better sporting project than Marcelo Bielsa’s side.

Croatian newspaper Večernji List has interviewed Gvardiol and asked why he agreed to sign a deal with the Bundesliga side when the offer proposed by Leeds was ‘financially better’.

“I am aware of the size of that club, the English league and the offer that has arrived, but from the beginning I had some thoughts of my own – my development comes first.

“It is still my dream to play in England, but I want to get there completely prepared. Now I don’t think this was the time for that step yet and that weighed in the decision.”

Gvardiol wasn’t keen on leaving Dinamo in the ongoing window, but he was also aware his sale could help the club improve their finances. That also played a part in his decision to sign a contract with Leipzig.

“When Dinamo accepted the offer of RB Leipzig. You know I didn’t push too hard to go because I’m fine in Maksimir. Dinamo is my club, I am developing and I have everything I need here,” the young defender explained.

“But I am aware that Dinamo does not rely on sponsors, tickets and TV rights like clubs from the top five leagues do. 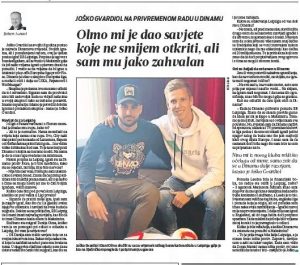 “And I knew the transfer was going to come sooner than I wanted to and I was preparing for it.

“That was primarily Leipzig’s wish [staying on loan at Dinamo], and I didn’t mind it. In fact, I cheered from inside for such an option. When I saw that Zoran Mamić had nothing against it, we all agreed that it would be the case.”