Philip Billing was one of the new faces who arrived at AFC Bournemouth before the start of this season.

The Cherries paid a reported £15m to acquire the midfielder’s services from Huddersfield Town, who were relegated from the Premier League last season.

This week’s edition of Tipsbladet has a lengthy interview with the Denmark international, in which a large focus has been on racism in sport and society.

A small segment was about his decision to make a switch to the Vitality Stadium, even when he had opportunities to move elsewhere.

“It was first and foremost the head coach Eddie Howe, who pulled me. I had other offers, but I had followed Bournemouth. I had heard many good things about Howe, the way he develops young players. He helps the young players,” he explained.

“When Bournemouth came [for me], I made the choice very quickly because of Howe.

“I also looked at the squad, and it was and is, both exciting and good. I could see myself playing here and it felt right in my stomach to go to Bournemouth. And that has also proved to be the case.

“Ryan Fraser is really talented and I think we have a lot in the squad. Nathan Aké, Joshua King, Callum Wilson, who are around the English national team. I just think we have a strong team across the board.”

However, Bournemouth’s performances on the pitch haven’t been impressive this term as they have managed only seven wins in the league.

They are currently 18th in the table with 27 points, level on points with Aston Villa and West Ham United, who are 19th and 17th respectively. Billing admitted Howe’s side were hoping to finish in the top half of the table this campaign.

“It’s really disappointing that we’re down here. We entered the season and hoped we could get into the top 10, maybe also even the top eight. It’s disappointing we are in the relegation zone,” the ex-Huddersfield man stressed.

“We have to deal with it, that’s how football is. We have seven matches, which are like Champions League finals, so every match is important. If we perform and live up to our abilities, I have no doubt that we will stay in the Premier League.”

The global health crisis has also impacted football and Billing detailed the precautions taken for the safety of those involved in the sport.

“I can understand the players who have been nervous, for example, about whether their children and family members could get sick. But I also think the training facilities over here are some of the safest places you can find in the UK,” Billing stressed.

“We are tested twice a week, our temperatures are checked every morning, and if you have slight symptoms, you are sent home immediately. I feel relatively safe here. 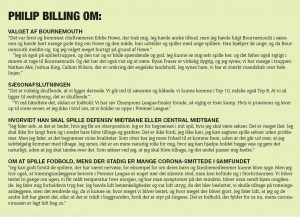 “I had some concerns and was a little unsure when it was decided that we should go back to the training facilities, but that changed as we could see how much we are being tested and how much is being done.

“I feel a little that I and the others have forgotten about it or it’s in the background because things are in control. It’s football that’s filling us now, while the Coronavirus has been put a little behind us.”