Luke Shaw’s resurgence at Manchester United during the 2020/21 season helped him regain his place in the England squad and he’s currently with the national team, preparing for Euro 2020.

Alex Telles arrived at Old Trafford last summer and has acted as a deputy to Shaw in his first season in the Premier League.

The two players currently cover the left-back position at United, but that’s not stopped, at least the Portuguese press, from linking Sporting star Nuno Mendes with the Red Devils.

Over the past few weeks, various reports have named Ole Gunnar Solskajer’s side are one of the suitors for the left-back, and these claims are not expected to go away soon.

Saturday’s edition of Record explains the 18-year-old is ‘destined’ for a big move following his fine displays for Sporting last season. There is ‘awareness’ about this within the Portuguese club.

When talking about potential candidates, the newspaper mentions United, along with Manchester City, Real Madrid and Barcelona. 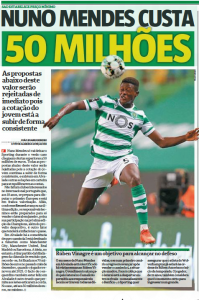 Mendes has a €70m release clause in his contract that expires in 2025.

However, Sporting will allow the defender leave if there is an offer in excess of €50m, and any proposal below this figure will be ‘rejected’.

The question, at least for United, is should they invest €50m or more on the left-back when they have more pressing needs in other positions.