Home Europe Player ‘denies’ Newcastle – Magpies do not ‘seduce’ him despite availability to...
SHARE

Even though it’s been a historic window for Newcastle United due to the many big targets they’ve been able to go after, the month is also being marked by several players turning down the chance of signing for the Magpies.

We now get to see another one in that list, and that’s Benfica centre-forward Darwin Nunez.

According to newspaper O Jogo, Newcastle had him among their January targets, and showed their willingness to spend €50m. That was turned down by Benfica, and the Magpies ‘admitted’ they could raise it to €60m.

That still doesn’t convince the Eagles, who hope the player will be more valued in the summer. But that isn’t the only problem, as Darwin isn’t keen on the transfer either. 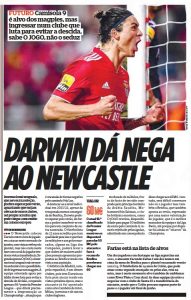 O Jogo claims that the striker is not ‘seduced’ with the possibility of joining Newcastle and ‘denied’ the club. The fact the Magpies are currently trying to escape relegation is ‘seen negatively’ by the player.

It’s said the 22-year-old prefers to wait for the summer, as he could have the chance of signing for a club of another level.

According to the newspaper, Atletico Madrid is one of the possibilities, although he was also linked to Inter Milan, Juventus, AC Milan and English sides.