Jordan Veretout annoyed a few people in France when he stood Saint Etienne up at the last minute, and instead signed for Serie A side Fiorentina.

Aston Villa had agreed a deal with Saint Etienne and Veretout, who spent the previous season on loan at Les Verts, had given the club his word.

The move to Fiorentina ended up seeing Aston Villa come out of it better, and Veretout also get himself a better deal and a transfer which clearly attracted him more.

Often outspoken, not being afraid to dismiss an Aston Villa return several times last season, Veretout has been quizzed on the controversial way he ended up leaving Villa this summer.

Speaking to L’Equipe, the midfielder stood up for himself and his decision: “Last year, I had a great season in Saint Etienne. A great club that I admire, with great supporters, super staff and great teammates. In this story, I may have been wrong, I had given my 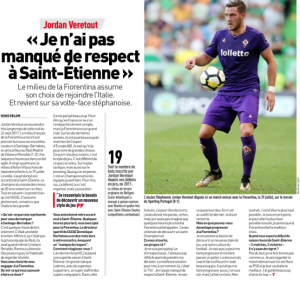 word, certainly, but I hadn’t imagined that a few hours later Fiorentina would call. I had this need to discover another Championship.

I’m not a disrespectful person. I thought a lot before I made my decision. The best solution for me at that time was the “Fio”. I didn’t disrespect Saint Etienne. I know what I owe them. They welcomed me last year. I thank them for that.”

Steve Bruce was probably happy with the extra transfer funds in the end, and even if Veretout has sounded big headed and arrogant on previous occasions, this time the former Aston Villa player may have a point.

There was no point him going through with a move he clearly didn’t want.