Earlier this month, we covered a report from Sport, who claimed Matthijs de Ligt’s approval of a Barcelona move is pending.

It was further claimed the La Liga winners are designing the whole operation with the defender’s agent Mino Raiola.

Ajax were initially hoping the 19-year-old’s future would be resolved before their Champions League quarter-final tie, which didn’t happen and clearly didn’t matter.

They registered a 3-2 aggregate victory over Juventus to make it to the last four of the competition. Along with the Champions League, Ajax are also in contention to win domestic competitions.

Thursday’s edition of Sport claims the centre-back ‘delays announcement’ on his future as he wants to focus on winning the treble with his current employer.

Despite the Netherlands international’s decision to delay where he will play next, Barcelona are ‘very optimistic’ about completing his signing and are also aware it’s not a ploy from the player to get more money from them.

Negotiations between the Blaugrana and De Ligt are on the right track and the Spanish champions do not show any concern about the possibility of the teenager not joining them in the summer.

Sport explains this is due to the fact that ‘everything is tied’ and they cannot think of a reason for De Ligt to not confirm his decision to play for them.

It’s claimed the Dutchman does not see it right to announce his decision at this crucial stage of the season because he don’t want to divert from the collective objective of Ajax. 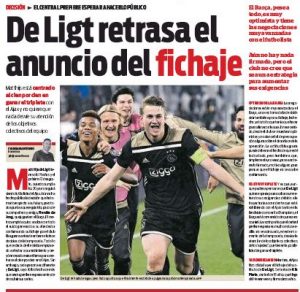 This sounds like De Ligt is delaying his decision purely for sporting reasons or at least, this could be what Barcelona are being told.