After an entire summer of optimism, the Portuguese press now admits it’s quite unlikely Bruno Fernandes will be making his move to the Premier League this summer.

All the newspapers report this and have details on the last bid made by Tottenham Hotspur, which was rejected. Now they all find it hard to believe that someone will pay the €70m demanded by Sporting.

The headlines say it all. Record writes that club president Frederico Varandas ‘resists until the end’, while O Jogo says the player is at ‘a dead end’.

There are some outlets who still have some hope, with A Bola calling today ‘D-Day’, and Correio da Manhã saying ‘Only Mendes can sell Bruno’. 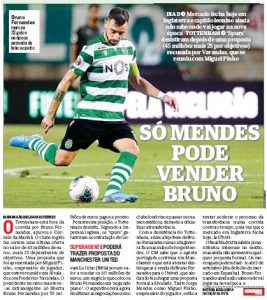 The likes of Correio da Manhã and O Jogo say Tottenham’s last offer was €45m up front and €25m in bonuses. It was turned down because the Lions want €70m up front.

Correio da Manhã writes that Jorge Mendes is still in Manchester trying to ‘unblock’ the transfer. Both he and agent Miguel Pinho are working to ‘accelerate’ and convince Manchester United to bid before the deadline.

They add that Tottenham have given up after having their latest bid rejected and going for Giovanni Lo Celso from Real Betis instead.

But with time running out for Premier League clubs, newspapers start to point out Real Madrid as a possible destination, and A Bola even mentions that clubs from Italy and Spain could still get Fernandes.