Home Europe Player ‘continues to be in sights’ of Bielsa at Leeds – Club...
SHARE

Erick Pulgar and Leeds United is a story that has been around for a couple of weeks now and yet we haven’t seen any movement.

It’s true that the transfer window has only just opened, leaving plenty of time for Victor Orta and Marcelo Bielsa to act upon their interest, but it would be nice both for us and the Elland Road faithful to see some progress.

The lack of it doesn’t mean Leeds have moved on, however, as La Nazione, one of the local Florence newspapers, explain Fiorentina ‘must deal with requests that could come for some players who aren’t currently considered as starters’.

Among those is Pulgar, for whom Leeds are mentioned as suitors, but also Torino, which is corroborated by Corriere dello Sport, who explain the Chilean midfielder ‘continues to be in the sights’ of the Premier League club. 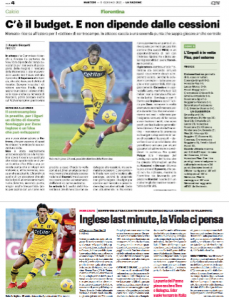 It’s not much, but it’s enough to keep the hopes up both in Florence and in Yorkshire that a deal could be done down the line, especially if the Serie A side need to offload the deadweight.

Bielsa and his scouting team clearly sees something in Pulgar, and it just so happens that Cesare Prandelli doesn’t need a midfielder of his ilk in his team.

“It’s not even a debate” – Ballon d’Or fury over Chelsea star being overlooked, pundit shares anger

Barcelona have offered player to Manchester United for January move –...