Home Premier League Player continues to be linked with Wolves and Watford, €10m will do...
SHARE

Turkish newspaper AMK Spor report Josef de Souza continues to attract interest from Premier League clubs and that the Fenerbahce board are hopeful of selling him this summer.

The Brazilian midfielder in recent weeks has been linked with Wolverhampton Wanderers and Watford, with reports this month the Hornets have tabled a bid for the player.

Souza only has a year left on his contract and the Turkish club are looking to cash in on him this summer.

AMK report the Fenerbahce board will accept offers around €10m as they want to get the central midfielder off their wage bill.

Again, Watford and Wolves are said to be interested in signing Souza in this transfer window and Fenerbahce are now waiting for formal offers 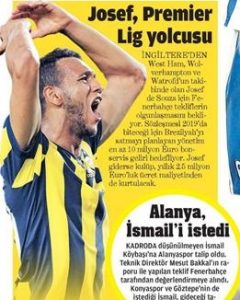 It’s also claimed the Yellow Canaries are open to talks over Souza, which will give interested clubs a boost.

The South American has been one of Fenerbahce’s standout players since arriving from Sao Paulo three seasons ago.