Once again, Bernardo Silva to Barcelona claims are building in the Catalan media.

The Manchester City player had been linked with Barca last year, but it was apparent the club simply couldn’t afford to sign him. At the time, the Portugal international’s desire to leave the Etihad was widely covered, and the story is going the same way this time.

Monday’s edition of Mundo Deportivo reports Bernardo considers his time with Manchester City ‘is over’, and he wants to start a fresh adventure elsewhere.

It’s claimed the City player was the subject of a meeting last week between Jorge Mendes, Joan Laporta, Rafa Yuste, Mateu Alemany and Jordi Cruyff. That’s possible, but it’s worth nothing there’s been multiple claims about the purpose of that meeting, involving multiple players. 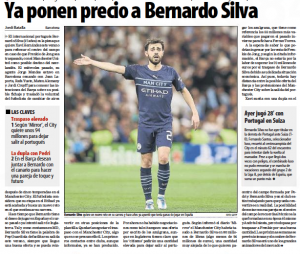 Mundo say Mendes told the Barcelona officials of Bernardo’s desire, and the agent wanted to learn what the chances of a transfer are.

Pep Guardiola is said to be ready to part ways with the player, as long as Manchester City receive a reasonable fee. There’s been initial contacts between the two clubs, but no formal negotiations and no offer made yet.