On August 9th, Sport reported Barcelona had reached an agreement with Ajax for Frenkie De Jong.

It was claimed the midfielder will come to the Camp Nou this month, if the Dutch club fail to qualify for the Champions League. Else, he will continue at Johan Cruijff Arena and join the Catalan club in 2019.

Erik ten Hag’s side’s defeated Standard Liege 5-2 on aggregate. They have to overcome Dynamo Kyiv in the last qualifier to seal a berth in the group stages.

Mundo Deportivo now claims signing the Dutch international ‘seems not easy’. De Jong, who confirmed Barcelona’s interest, admitted there has been no agreement between two clubs for his sale, either this month or next summer. 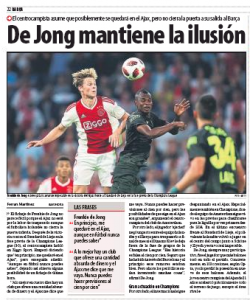 “That story is false. Sure that there has been interest from Barcelona and at the beginning, those rumors were well. But now the newspapers are walking inventing many things,” De Jong was quoted as saying by Mundo.

Having ruled out about any pact between his employer and Barcelona, the player admitted he is likely to continue with the Dutch outfit. However, he also stressed the Eredivisie outfit could sanction his sale, if a club offers “absurd money” to Ajax.

“In principle, I’m at Ajax. Though in football you never know. The good thing is in four days, if there is a club that offers an absurd amount of money and then, Ajax could tell me to leave. You can never make forecasts one hundred percent, but the possibilities to continue at Ajax are great,” the midfielder explained.