When there are big transfer stories around Sevilla or Real Betis, a good place to find detailed and well sourced updates is the Seville media.

Sunday’s edition of ABC Sevilla has a big article on Jules Kounde’s potential move to Chelsea this summer. They state Thomas Tuchel is ‘pushing’ for the player’s signing and has rated the defender for a long time.

Marina Granovskaia is trying to see how a deal can be built, well aware Chelsea will need to bring in some funds to cover some of their spending this summer. The newspaper says it may even take Roman Abramovich getting involved to have the final say, either deciding the Blues go all out for the signing, or binning the idea and looking elsewhere.

Sevilla are currently ‘waiting’ to see what happens, and believe they have a ‘position of strength’. It’s long been reported in Spain that the club know if they don’t sell Kounde this summer then they will be able to a year from now, so there’s no panic for the deal to happen.

They already rejected Manchester City’s €55m last year and are ready to be strong again. However, that isn’t to say the move won’t happen, and it’s explained Kounde is ‘confident’ things will progress soon. 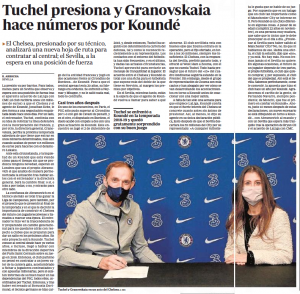 Kurt Zouma gets a mention and Sevilla ‘welcomed’ him being included in a deal, although they didn’t feel Zouma plus €30m (as a fixed amount, presumably more in bonuses) was a good enough deal.

Despite claims in England that Zouma wants to stay in the Premier League, ABC say the player’s agents are ‘more cautious’ about making straight claims like that. They want to see how things develop, and would be hoping for a ‘better exit’ than the rumoured move to West Ham.