A few days ago, we carried a report from ABC Sevilla, who claimed that Tottenham Hotspur’s Fernando Llorente and Lucas Perez of West Ham United were offered to Real Betis ahead of the January transfer window.

On December 6th, Spanish newspaper AS reported that Liverpool striker Divock Origi was also on the agenda of the La Liga outfit.

Today’s edition of AS claims a move for the Belgium international is ‘very difficult’, but the arrival of Perez to Estadio Benito Villamarín next month is ‘more possible’.

Manuel Pellegrini signed the Spaniard from Arsenal in the summer, but he’s started in only one league game this season and has two more starts in the EFL Cup to his name.

It’s claimed former Deportivo La Coruña now wants to return to Spain because of his limited playing time with the Hammers. 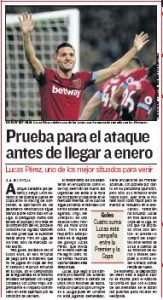 The English side aren’t thought to be keen on a transfer, but Perez is confident that in the coming weeks West Ham will open the door for him to join Betis.

Quique Setién’s side are keen on adding another attacker next month and as a precautionary measure, they may have identified another player as a target, if they fail to land Perez.

These claims come at a strange time, given the 30 year old has had good game time in both of West Ham’s last two matches, scoring twice against Cardiff City.