Thursday’s edition of Marca has Donny van de Beek on the front page, talking up a move to Real Madrid.

Manchester United and Tottenham also appear on the cover, with it being claimed the Dutchman and Ajax have ‘rejected’ both clubs.

According to the Spanish newspaper, Van de Beek to Madrid ‘only lacks the signature’, and should Los Blancos decide to go through with the transfer the player will cost them €55m.

Part of the claims are based on reports from the Netherlands, which can be traced back to a De Telegraaf journalist, and it’s worth noting the Dutch newspaper hasn’t gone big on it in their print edition.

Manchester United and Tottenham are said to have asked about signing the player ‘in this winter market’, but have been pushed away so priority can be given to Real Madrid.

That said, Marca make it clear that before going through with the signing, the Spanish 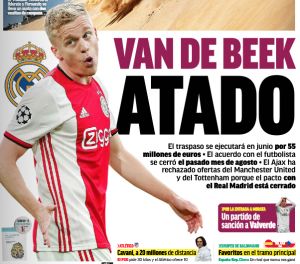 club would first need to sell some players.

There’s an ‘overbooking’ currently in midfield, and with loan players, including Martin Odegaard and Dani Ceballos, returning in the summer the squad is simply too big for purpose.