Monday’s edition of Sport had Samuel Umtiti across the front page and once again voiced worry about Manchester United interest.

Barcelona’s big concern with Umtiti is the French defender has a buyout clause of just €60m. Given how the market has inflated over the past year or so, that amount looks strangely low and would represent a good deal for a buying club.

Umtiti and his representatives are well aware of this, and it gives them leverage on a new contract, but Barcelona don’t want to pay as much as is being asked.

Sport believe Manchester United have offered the player €9m per year after tax, and on a five year contract that’s a €45m deal. Barca don’t want to reach such figures and therefore the situation is described as ‘increasingly complicated’. 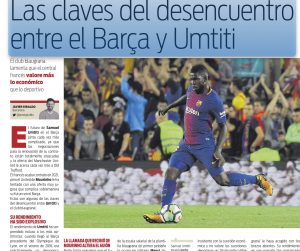 Jose Mourinho is once again said to have contacted the player personally, and Sport suggest Umtiti’s priorities may be more financial than sporting. That sort of suggestion, preparing for a character assassination, perhaps shows that the worry is genuine.

The impasse sees Umtiti ‘closer to Old Trafford’, according to the Catalan newspaper.