Despite signing Rasmus Kristensen, Leeds United are still being linked with a right-back in Ola Aina.

The Torino defender has been a player the Elland Road side have tracked for some time, but they are no longer the only ones in the Premier League doing so.

That’s according to Gazzetta dello Sport, who point out that Nottingham Forest, freshly promoted to England’s elite and intent on having a good window, have joined the fray.

The newspaper, looking at what the future might hold for the former Chelsea starlet, explain ‘the potential is high’ for the player, who has shown he has room to develop into a much better player.

That’s why he is ‘closely watched’ by both Leeds and Nottingahm Forest during this transfer window, although there is no indication that a move is about to be made from this article alone. 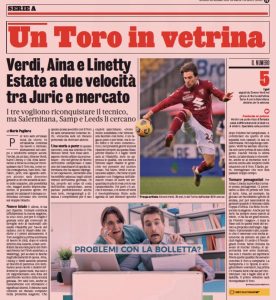 Whether a move to Elland Road or City Ground will happen remains to be seen, but it’s clear the London born Nigeria international has suitors on these shores.

Not only that, but with Carl Jenkinson leaving the club, Nottingham Forest are in need of a new right-back.

As for Leeds, the arrival of Kristensen should have put an end to this, but a lot depends on what Jesse Marsch wants to do with the likes of Luke Ayling, Stuart Dallas and even Cody Drameh, recently returned from a loan spell at Cardiff City.