Home Europe Liverpool hovering for potential signing – Player ‘will do everything’ to get...
SHARE

Villarreal star Arnaut Danjuma’s name has been associated with Liverpool and a few other clubs in recent months.

The winger finished the season with 16 goals and four assists and is with the Netherlands, preparing for their upcoming international matches.

Earlier this week, the 25-year-old revealed he was informed that Liverpool are following him ‘closely’, but admitted he has not had contacts with other clubs so far.

El Periódico Mediterráneo state the player has a ‘great poster’ in the Premier League and is open to leaving the La Liga side, if there is an offer that is interesting to all parties.

Liverpool are keeping tabs on the ex-Club Brugge star. The attacker ‘wants to leave’ Unai Emery’s side and has asked them to ‘accept’ an offer that he could receive this summer. He hasn’t adapted well at Villarreal and has asked his agent to ‘find a way out’ for him.

Danjuma’s representatives have established contacts with the top-level clubs, who could meet the Spanish club’s fee demands.

The report states: ‘The truth is that Danjuma wants a change of scene and his head is not at Villarreal. Everything happens because the player’s agent achieves a cheque of €40m, a figure close to his termination clause, and puts it on the club’s table to be able to leave.’ 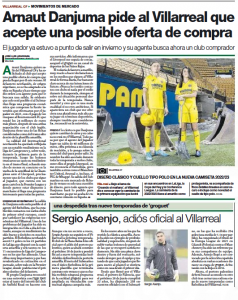 Manchester United and Paris Saint-Germain. His exit is a ‘question of money’ and the Dutchman ‘will do everything possible to leave’ as he has not adapted very well in Spain.

Liverpool have followed Danjuma, something that has been acknowledged by him and backed up by the newspaper. The player’s agent is already at work to help his client get a move and the Premier League could be his ‘next destination’.

If Jürgen Klopp’s side or any other club were to place a €40m bid, then there is a good chance for the deal to be carried out this summer.