Since the transfer window closed and Bruno Fernandes stayed at Sporting, there have been two types of stories about him. Some talk about his short term future with the club, and others continue to speculate about his next destination.

We see a mix of it in A Bola’s edition today. Their big headline says there should be a meeting over the midfielder’s new contract this week.

Fernandes currently makes €1.5m per season at Sporting, and will have his salary raised to €2m (figures likely after tax). The problem is the Lions can’t still get out of Tottenham’s shadow.

When Spurs tried to sign the player in the summer, they offered him €3.5m. That’s a lot more, and that’s why it’s mentioned several times in A Bola’s story. 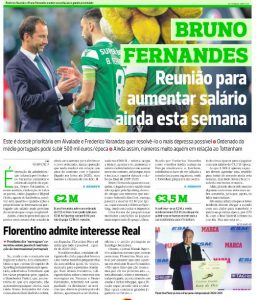 Then the newspaper talks about Fernandes’ future. They claim that Sporting are still interested in selling him for €70m.

They say Tottenham made ‘several offers’ when trying to sign him, but this time, it’s Real Madrid who get bigger attention. Especially because president Florentino Perez has been quoted by the Spanish media confirming their interest in the midfielder.

There are no claims of new talks for now, but it becomes more likely that it will be Real Madrid who will lead the race for Fernandes in the next transfer windows, unless Tottenham try again.