Leandro Trossard had an opportunity to join Arsenal last summer, but the winger snubbed the Gunners for Brighton & Hove Albion.

The interest from the north London club was confirmed by the 25-year-old’s agent in June, who also admitted his client views the Seagulls as stepping stone to making a big move elsewhere in the future.

Het Belang van Limburg had an opportunity to interview the Belgian and he’s now echoed the comments made by his agent last summer.

When asked if he made the right choice by joining Graham Potter’s side, Trossard said: “I think so. It is a good football team, with an attacking coach. The people who follow our matches are thrilled to watch us. This is the ideal club for me to take steps forward.”

The Covid-19 pandemic has resulted in the suspension of the Premier League since March. After initially staying in England, the player was allowed to return to Belgium.

“Normally I drive from Brighton to Belgium by car. But I have an English number plate and feared problems at the borders. So, I took the Eurostar. That went smoothly,” he explained.

On the possibility of the Premier League resuming in June, Potter’s man said: “I would love to play football again, but I am not completely at ease with it.”

Brighton are 15th in the table with 29 points and have a two point lead over 18th placed Bournemouth. Trossard stressed his side have enough quality to avoid relegation, if the league resumes.

“If you look at it that way [better for Brighton if the season’s ended], then yes. We have our destiny in our own hands,” the player stressed. 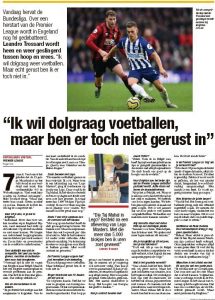 “We have enough quality, I’m not worried. It is a pity that we lost too many points due to bad luck. We could have won four more games.”

Trossard has three goals and four assists in the league and even though the numbers are not convincing, he stressed it’s normal for a player to undergo an ‘adjustment period’ after moving from the Jupiler Pro League to the ‘strongest league in the world’.