It was also suggested the Argentina international is the ‘least expensive’ option when compared to the other two players.

The Blues are once more mentioned and Rico adds Tagliafico has a proposal ‘on the table’ from the English club. However, there’s no information on the details of the offer.

Frank Lampard currently has Marcos Alonso and Emerson Palmieri as the two recognised left-backs in his squad. For many months, the two have been heavily linked with a move to Serie A.

It’s likely that one of them would exit Stamford Bridge in the summer and should that happen, the Premier League side could bring in a new player in the same position. 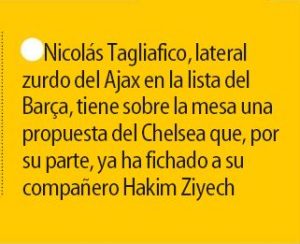 Ajax and Chelsea have already agreed a deal for Hakim Ziyech and if the Dutch side accept the latter’s proposal for the defender, then he could follow Ziyech to the London club.

Tagliafico has five goals and seven assists in all competitions for Ajax this season.