Dusan Vlahovic has scored 21 goals in 36 Serie A matches for Fiorentina so far this season, which is a huge improvement on the six in 30 he managed during the last campaign.

The 21-year-old has had a breakthrough season, and that’s inevitably seen him linked with other clubs, including Arsenal.

Corriere Fiorentino have an article on the young striker today and cover words he’s given to the Serbian media. It’s felt that whilst Vlahovic is happy with La Viola he’s tempted by the level of clubs interest in him, and is ‘in a hurry’ to progress his career.

He is said to be aware that ‘some trains don’t come twice’, meaning he knows there’s no guarantee he’d get a big move in the future if he snubs the idea this summer. The clubs tempting him are Arsenal, Borussia Dortmund, AS Roma and AC Milan. 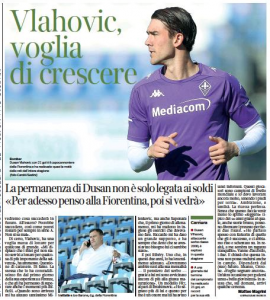 Fiorentina are 13th in Serie A, so out of the running for any kind of European football. Arsenal may have a disadvantage when it comes to some of the competition, given the Gunners can’t offer Champions League football.

Dusan Vlahovic has a contract with Fiorentina lasting until June 2023.