On January 17th, we carried a report from Mundo Deportivo, who claimed Ajax’s Frenkie de Jong is set to snub Barcelona for Paris Saint-Germain.

It was also mentioned Barca wouldn’t give up up chasing the midfielder, hoping to convince him to switch to the Camp Nou.

The final page of today’s edition of the same publication has an update provided by journalist Miguel Rico.

He claims the Spanish champions ‘fought desperately’ for the 21-year-old, but the player himself has called the Bluagrana to say ‘no’.

What’s more interesting is the Barcelona board maintains their negotiators had already suspected the outcome even before De Jong made that call, and they decided to keep quiet.

The Netherlands international’s agent Ali Dursun had held off sealing a deal with the Catalan club, sparking suspicions.

Rico says Barcelona’s board are of the belief the agent didn’t act in the right way, but then they would think that if they’re set to lose out. 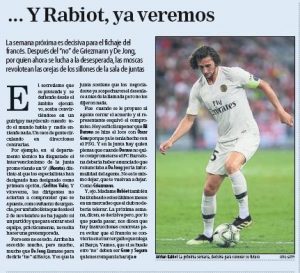 Mundo Deportivo say Barcelona now have to move on from De Jong as he’s not going to join them and they have to find another target to strengthen their midfield.